Ho Chi Minh City (formerly Saigon), the country's commercial center and home to a growing number of upscale restaurants and shops. Visit Chinatown, the Thien Hau Pagoda, the Reunification Palace, the Opera House and the Hotel de Ville. You can also visit the powerful War Remnants Museum. Take a day trip to the Cu Chi Tunnels and watch an unusual religious ceremony at the main temple of Cao Daism, a unique fusion of world religions. Tour the narrow canals of the Mekong Delta to experience the traditional side of Vietnamese river life.

Upon arrival at Hanoi's Noi Bai International airport, you will be greeted by our guide and transferred to your hotel. You will have a welcome dinner followed by a water puppet performance and an overnight stay in Hanoi.

This morning your guide and driver will transfer you 40’ to Nom Village. This ancient and quaint rural village is a gem for cultural and historical experiential appreciation; a wonderful example of a village in Vietnam’s northern delta that follows traditional structural layout. Highlights cover a spectrum of interests. Here are a few examples for you to consider: spend time with the villagers and learn about their personal and village stories, choose from ten ancient houses and seven places of worship, understand and see the typical village layout (communal house, market, entrance gate, pond, wet market, and stone bridge). As a popular spot, if you are fortunate you may even catch a glimpse of a Vietnamese movie being filmed. Then drive back Hanoi to enjoy lunch at local restaurant before explore Hanoi City by Vespa.

Explore the charming city of Hanoi, often referred to as the ‘Paris of the East’, with its yellow ochre colonial buildings, tree-lined boulevards and scenic lakes from the back of a Vespa scooter. Visit the historic Ho Chi Minh Mausoleum, an imposing monument of marble and granite built to house the preserved body of beloved revolutionary leader Ho Chi Minh, affectionately known to the Vietnamese as “Uncle Ho”. Tour the One Pillar Pagoda, a Buddhist temple built in 1049 of wood in the shape of a lotus blossom and set on a single stone pillar, considered by many to be one of Vietnam’s most iconic pagodas. Visit Ho Chi Minh's House nearby, a simple wooden house in a tranquil setting where Ho Chi Minh lived and worked. Continue on to the Temple of Literature, Vietnam’s first national university built in the late 11th century. Enjoy the Vespa ride back to the city centre to visit the scenic Hoan Kiem Lake (literally, “Lake of the Returned Sword”) named after a magical sword once used by a legendary Vietnamese emperor to defeat the Chinese Ming Dynasty. On an island in the middle of the lake sits the Ngoc Son Temple accessible by the classical Huc Bridge. Conclude the tour with a visit to the famed Old Quarter known for its ’36 streets of 36 wares’ named after the original 36 artisan guilds that date as far back as the 13th century. Explore the fascinating maze of back streets, fronted by narrow houses known as “tunnel” or “tube houses”, built to avoid taxes based on the width of their frontage onto the street, a wonderfully eclectic glimpse into Hanoi street life. Then return to hotel

formations rise out of the sea. This quiet bay is untouched and remote, as not many cruise ships visit.

15:30 The cruise vessel approaches the Ba Trai Dao or Three Peach beaches in Lan Ha Bay, a natural frontier between the provinces of Halong and Haiphong. This secret hideaway has beaches, caves and coves, plus the spectacular natural beauty of about 400 islands. Guests can try kayaking or simply swim in the clear waters of the bay.

17:30 Back on Heritage Cruises, enjoy life aboard the vessel or in your suite, and with cocktail in hand watch the sunset over the Gulf of Tonkin.

18:30 Activities include afternoon tea and the chef will lead a Vietnamese cookery class.

19:30 A memorable dining experience will be offered at the restaurant, with local food in an intimate and romantic setting.

21:30 Enjoy evening views of the bay at the bar on the top deck. Try your hand squid fishing. The bars are open until late.

6:15 Start the day with a session of Vovinam on the sundeck,

6:45 The guests will enjoy a light breakfast on board.

7:15 Head off in a bamboo boat to explore the Dark and Bright Cave

10:00 Enjoy brunch while cruising back to harbour.

11:00 Return to Got Harbour. Then transfer to Hanoi airport for flight to Hochiminh.

Upon arrival, you will be welcomed by our guide and driver then transfer to hotel. Free at leisure and overnight in Hochiminh.

Depart from Saigon for a 2.5hr drive to Cai Thia in Tien Giang Province. Exchange vehicle for bicycle as you cycle on a 1-2hr trip along quiet paths around the village of Hoa Loc, past rural scenes of wooden homes thatched with palm fronds, and local fishermen and farmers. Take a 45min cruise to An Binh Island in Vinh Long where you will enjoy a lunch of Mekong Delta specialties at the Ut Trinh home restaurant to the soundtrack of traditional folk music. Transfer to a rowboat for an up close and personal experience of the network of narrow canals typical of the Mekong Delta. Shore excursions include workshop visits: a brick kiln where locals make lovely clay pottery and bricks, and the Viet Artisans craft workshop, a non-profit project benefiting unemployed women in the rural Delta. Cruise back to Vinh Long where your car awaits for the drive back to Saigon.

You will leave HCMC to lush My Tho, where you will board a private boat to go through the green vegetation of the canals to an orchard, where guests are treated to a delicious lunch in a local restaurant in the heart of the Mekong, complete with succulent tropical fruits. You also visit the snake farm, Dong Tam, that breeds snakes for, among other things, snake wine. Then you will head back to HCMC for an overnight stay.

In the morning you will enjoy a half-day private excursion to the Cu Chi Tunnels. The Cu Chi Tunnels consist of more than 200km of underground tunnels. This main axis system has many branches connecting to underground hideouts, shelters, and entrances to other tunnels. The network included innumerable trap doors, specially constructed living areas, storage facilities, weapons factories, field hospitals, command centers and kitchens. Today the remaining tunnels have become a major tourist attraction giving the visitor a unique experience and a feel of what underground life was like during the U.S.-Vietnam War.

In the afternoon, you will visit the Reunification Palace, the Opera House and the Hotel de Ville. You should also visit the powerful War Remnants Museum. You'll stroll through the city's main shopping boulevard with fashionable boutiques and hill tribe crafts, high quality linens and house-wares. You will have an overnight stay in HCMC

There is no activity planned for today so you are free to go for souvenir shopping until transfer to the HCMC airport for your departing flight. 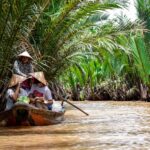 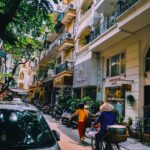 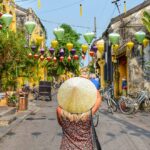 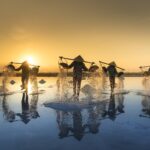 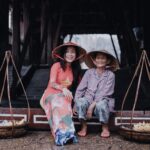 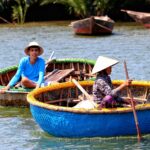 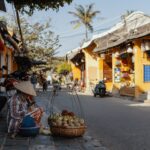 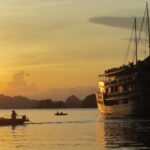 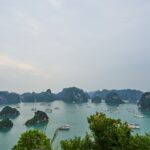 Rates are based on lowest fares.
Rates increase during the school and public holiday periods.
Please enquire for a quotation over the school holidays.

Prices are subject to change due to airfare increases, currency exchange, fluctuations and any unforeseen circumstances, without prior notice.