The capital of the United Arab Emirates (UAE) and also the largest of the seven emirates, accounting for more than 85% of the country’s total landmass. A relatively short time ago, Abu Dhabi emirate was not more than a simple island settlement consisting of a fort, a few coral buildings and numerous barasti huts. Today, Abu Dhabi has transformed itself into a modern cosmopolitan capital with a lot to offer for its visitors.

Abu Dhabi is known in the region for its greenery, which was once just a desert strip, it now offers numerous parks and gardens as well as several of ongoing conservation projects. The emirate enjoys virtual year-round sunshine with little rainfall and a superb winter, making it an attractive destination to visit throughout the year. During the hotter months (June – September), where temperatures can rise up to 42 degrees with high humidity, Abu Dhabi presents some world-class indoor attractions to keep visitors cool from the unbearable heat. Attractions of such include the Yas Waterworld- an expansive water park offering 43 thrill-a-minute rides and slides. Ferrari World Abu Dhabi, the world’s first Ferrari theme park and the largest indoor attraction of its kind, is sure to take you on the Ferrari adventure where stories are told and thrilling rides to be enjoyed. For travelers with a sense of adventure, the Middle East’s first man-made whitewater rafting, kayaking and surfing facility, known as Wadi Adventure, is the place to be.

Abu Dhabi Corniche, the city’s seaside promenade, stretches for approximately eight kilometers and is a keen spot for joggers, cyclists, walkers or even just to bask on the Blue Flag public beach complete with lifeguards which edges clear, safe waters. Along the Corniche, architecturally inspiring high rise corporate headquarters create a Manhattan-like backdrop to a public space which is dotted with immaculately kept gardens and fountains.
Built over a series of natural islands with more than 400 kilometers of pristine coastline, inviting warm waters, a myriad of attractions- ancient to modern- and awe-inspiring deserts, it has become evident that Abu Dhabi is one of the most diverse destinations in the world.

How to travel to Dubai

Abu Dhabi is easily reachable by flight directly from Cape Town and Johannesburg with daily departures on Etihad Airlines. Abu Dhabi can also be reached by road from Dubai, which is a 2-3 hours drive, a great combo with Abu Dhabi. 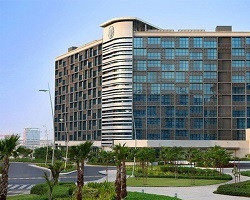 Conveniently located on Yas Island, a few minutes away from the Yas Marina Circui and Ferrari World. 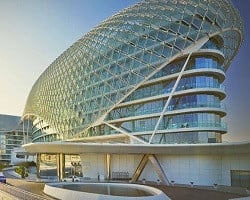 Set half on land and half on water, this unique hotel overlooks the Yas Marina Circuit, host of the Formula 1 Abu Dhabi Grand Prix.